“I am dying.
I am dying a hundred deaths. What did I do to deserve this?”
-Tamara Fatum

That’s actually exactly what I thought after my first 30 minutes of so called “Bikram Yoga”.
Okay, who am I kidding? It was after like 20 minutes…I had emptied my whole bottle of water after 30 minutes. After 20minutes, I was practically done with this whole thing. No thank you, I have had my share of struggle!
But then I don’t quite like quitting and I saw all these people,sharing the same pain ,saw them struggling too ( apart from that super small and talented chinese girl next to me who didn’t hesitate to adjust my postures whenever she wanted to). So I stayed.
I kept on telling myself that there was only one hour left- how I was supposed to survive the next sixty minutes without spilling the whole bottle of water over my head or opening all the windows, was a thing that I hadn’t figured out yet.
But let’s go back to the beginning…

The first time that I had the feeling that this class wasn’t the best idea of all times was when I entered the room where the class takes place. I had decided to do Hot Yoga because it was a combination of two things that I like. I like it warm and I like Yoga- why not try hot yoga?
Also as a lower east side New Yorker there should be at least one cool thing that I do, I thought (ironically of course!)

So I went to the place with the pink door and I had a good feeling about it.
The people were nice and friendly and everyone was in a good mood. Also I wasn’t the only one who was there for the first time.  They gave me towels and a mat and after I got changed I entered the room. I was nervous but also looking forward to the experience.

It was hot like a sauna and the people that left the room who had hit the class before mine looked like they had just taken a shower.
But they didn’t. It was their sweat. My feelings could be pretty much described with the words “eeewww”.
Most of the people were only wearing sport shorts and sports bras.
From couples in their sixties, with a lot of free time to girls in high school, there were all different types of people.
Me, the naive little girl that I sometimes am, asked if I needed a water bottle, the girl smiled at me with a sense of pitfulness…
Silly me! I would have collapsed without the water.
Then I saw this man doing a handstand for soooo long! His head had gone all red, tomato-ish and his arms were shaking. Bit he stood still.
And my first thought was “Oh fuck, I can’t even do a handstand without a little help from a wall”.
Then I saw the wet spots on the floor …sweat….mmmmhhh yummy!
Let’s say I have entered rooms that were sort of more enjoyable…
But leaving was not an option, I made a commitment when I entered the room , I wasn’t going to quit.
I mean I could also skip some postures!
So I took my mat and placed it somewhere random in the room.
I liked the temperature and thought that this wasn’t going to be too hard.

The class started with a breathing exercise ( which was not too much of my thing, and soooo cliché!). I was worried that this was the only thing we were going to do for the next 90min.
Hell no, I wouldn’t do more than 3 breathing exercises. I didn’t come for some advice how to use my lungs.
But after two sets of this breathing exercise ( which I learned is necessary to open up your lungs to make the postures easier), the actual class started.
Quickly,I had already realized that this petite Chinese girl next to me was more than over motivated and she gave me the feeling that this is a competition.
But no! Calm down Tamara, this is definitely not the thought behind yoga!
So I tried to focus on my postures.

After 20 minutes my sweat was dripping and I was all dizzy. The whole room was breathing heavily and some also sat down to take a break.But I didn’t want to do that. Please, I am young and I didn’t want to seem weak.
What I did instead drew way more attention.
I jumped out of my postures and ran towards the door! I needed fresh air. I NEEDED it. I couldn’t stay one more minute in this room.
But then the instructor asked me if I was okay.
So what do you say in a moment like that?
All these suffering people around you and none of them leaves. So I told him I had to pee.
It was a very weird moment. But at least I could spend three minutes sitting in front of the ventilator in the changing room. Breathing.
But I had to go back. Back to hell.
It wasn’t the movements that were so hard. Some of them were difficult of course, but you can work on postures- that’s not the problem.
There were several other problems though. First of all my circular flow was in a horrible state, the next thing was that it is pretty hard to hold your leg in the air only by touching the ankle, when your whole body is wet. Then I wasn’t allowed to drink water in the middle of a posture and moreover there was over 45 minutes left. Also I was sort of distracted because yes, sometimes it’s a little ugly when you have the other persons sweaty foot right in front of your face, scared that it might touch you.
The problem was, that my first class of Hot Yoga was on a weekend so there were way too many people in the room. Usually there is more space between people.
I can definitely tell that Bikram Yoga is not nearly as glamorous as described. 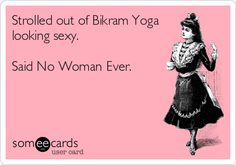 Another point is, that you have to get used to not take the towel and wash of your own sweat.
There is no short pause when you are in the middle of a posture. No millisecond where you can wash the sweat of your face.
If you have sweat slowly dripping into your eyes..well, that’s your own problem. Handle it.
And the last point: the instructors. They are actually all super friendly and nice and positive and helpful, but in my first class I felt like stabbing him, as he kept on telling us that we could solve all of our problems only by a balance of pulling and pushing.
I mean come on, I am dying and you’re telling me some riddles how to get my life into balance with pushing and pulling?
NOT the right time.
How am I supposed to pull and push if my lungs are not even able to breathe in the oxygen that I need, as I am standing in the most awkward unnatural position?
Plus the instructors are ONLY instructing, they’re not showing you the postures by doing them themselves. And even they are sweating, so for them it’s just like sauna. They don’t share the pain.

I don’t know how many times I have asked myself, what was wrong with me when I made the decision to come here.
Or how many times I’ve told myself, that after this class, I would never come back to this bloody room.
But I did.
Because after the class was over, I sort of forgot my pain and struggle.
It was like the shower washed away all of these thoughts. Actually, I felt great.
Yes, my muscles were a little sore the other day and I was super tired afterwards, but I felt great. So since then I have been there over and over again.
Most of the time I have these minutes where I ask myself what the hell went wrong with me, but then it’s fun too. Sometimes I just love it and it’s an amazing “me-time”.
Also when the instructor is good.
But then the other day, I just took my mat and my towel and was on my way to leave the room. I was tired and hungry and in a bad mood. And then the instructor pushed me to stay. Even if I was just sitting there. I heard him saying a lot of blabla and I gave him looks, that should have killed him instantly.
Oh Gosh, when I think of it now, I am getting mad again…
Seriously I wasn’t that mad in a long time. Who did he think he was?
And even more annoying: Who am I, that I let someone tell me when and how to suffer???
Of course, after the class I was thankful that he didn’t let me leave, because I would have felt horrible, but also I sort of hated him a little bit.

(That’s a picture from my yoga place- it’s an amazing spot, a place where you can always come to…I really recommend it if you want to get started and live in the L.E.S.!)

For the bold and expressive girl.

Tales from the mouth of a wolf

About traveling,life and things that cross my mind.